Radium Girls by Eleanor Swanson / Now, even our crumbling bones / will glow forever in the black earth 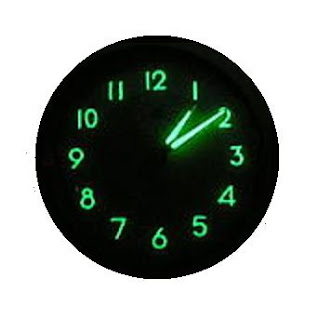 Radium Girls
by Eleanor Swanson
We sat at long tables side by side in a bigdusty room where we laughed and carriedon until they told us to pipe down and paint.The running joke was how we glowed,the handkerchiefs we sneezed into lightingup our purses when we opened them at night,our lips and nails, painted for our boyfriendsas a lark, simmering white as ash in a dark room."Would you die for science?" the reporter asked us,Edna and me, the main ones in the papers.Science? We mixed up glue, water and radiumpowder into a glowing greenish white paintand painted watch dials with a littlebrush, one number after another, takingone dial after another, all day long,from the racks sitting next to our chairs.After a few strokes, the brush lost its shape,and our bosses told us to point it withour lips. Was that science?I quit the watch factory to work in a bankand thought I'd gotten class, more money,a better life, until I lost a tooth in backand two in front and my jaw filled up with sores.We sued: Edna, Katherine, Quinta, Larice and me,but when we got to court, not one of uscould raise our arms to take the oath.My teeth were gone by then. "Pretty GraceFryer," they called me in the papers.All of us were dying.We heard the scientist in France, MarieCurie, could not believe "the mannerin which we worked" and how we tastedthat pretty paint a hundred times a day.Now, even our crumbling boneswill glow forever in the black earth.

Copyright © 2002 by Eleanor Swanson
Posted by Vleeptron Dude at 2:34 AM

Another of the stature of those women scientists was Rosalind Franklin, who spent years painstakingly taking x-ray crystallography images of DNA. Her images were the central clue that led Watson, Crick and Wilkins to guess the 3D molecular structure of DNA, and win the Nobel Prize.

In his memoir "The Double Helix," Watson was particularly dismissive and abusive of Franklin, and the other two winners took pains to distance themselves from Watson's misogynistic account. I think both of them publicly said Franklin deserved to have shared the prize. The prize was awarded in 1962, but Franklin died of cancer in 1958. Above and beyond her work on DNA, she is credited with developing the entire science of x-ray crystallography.

All the other women scientists mentioned in the comic strip -- well, they're fascinating, and well worth reading about.

Thank you for posting "Radium Girls."

Thank you for writing it. The Radium Girls are long dead, but their humanity lives on through you.

Everybody knows a tiny urban legend about how the watch painter women used to lick the brushes to make a fine point. But the actual full history of the Radium Girls, and the trial -- these are largely unknown.

What drew you to this story and inspired you to write this poem?

The lineation is fine. I appreciate your question. Since the book is about Marie Curie and the discovery of radium, I relied heavily on biographical material about her. Curie did say she could not believe "the manner in which they worked," and when I did further research on them, neither could I. That was the impetus for the poem. I am also interested in writing about Rosalind Franklin.

Rosalind Franklin's early death made her ineligible to share the Nobel Prize, but in recent years all three of the laureates (Watson the most belatedly and grudgingly) have expressed their conviction that she deserved the prize.

She did graduate work in Paris -- the Pasteur Institute, I guess -- and was lifelong smitten with Parisienne notions of coiture and fashion. I don't mean to suggest that France is some sort of gender Utopia, but she was accepted as a colleague much more cordially in Paris than the nasty cold shower she encountered when she came back to London to work on DNA X-ray crystallography.

Good luck with the Franklin book! Oh and look, I filched your poem without asking -- I owe you a pizza. Let me know if you're ever sliding by my neighborhood -- Smith College, Mount Holyoke, Amherst, etc.

(It doesn't HAVE to be pizza, but whatever you want, it's on me.)

Thanks again. Pizza, beer, beer and pizza? If you're ever in the Denver/Boulder area, I'll take you up on that offer.

Don't tempt me to go to Boulder, 42 years after my last visit I'm still gobsmacked by how gorgeous Boulder is.