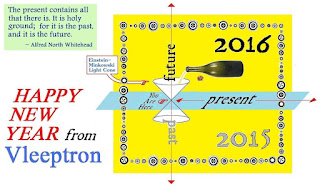 uhhh wow we just had our first nasty Solid Precipitation Event of the Winter (which, calendrically, began 9 days ago, with balmy spring weather), and an hour ago (while the Happy New Year fireworks set a Dubai skyscraper ablaze) I slid and slipped on ice and snow to drive into town to get Chinese food -- the menu still calls it Peking Duck, but I guess it should be Beijing Duck.

If Vleeptroids will recall, the first HNY greeting I designed was meant to do only one thing: Not have any of the standard famous hokey stereotypical cliches, like the old bearded man limping & wheezing out, and the neonate in a diaper/nappy crawling in.

Albert and his pal Herman cooked up this-here Light Cone to represent ... well, Everything. The Past, the Future, the Present, and all the crap that goes on Everywhere and Everywhen.

The idea is that the constant velocity of light speeds in all directions To and From HERE & NOW.

There may be goofy crap Outside or Beyond the Light Cone, but we can never perceive or experience it. It is Forever Unknowable. Because we can't see stuff beyond where light has travelled from NOW.

(For you Unatheists, God, or However Many Gods you believe in -- He, She or Them know all this Outside-the-Cone Goofy Crap. But we mere mortals and Einsteins and Minkowskis, we can't even guess. We are, to put it bluntly, Too Fucking Dumb.)

(I personally think that Killer Clowns from Outer Space live outside the E-M Light Cone -- but I got no proof.)

Now I will briefly -- as briefly as possible for the verbose Vleeptron Dude -- summarize the quickly expiring Year 2015.

I could go on.

But, as Fred Schneider & the Shake Society sang:

THIS PLANET'S A MESS!

Now I'm going to prepare to eat my Beijing Duck and Drink my methode champagnoise and try to stay awake until our local midnight about 5 hours from now. (I always like to hear Guy Lambardo & His Royal Canadians sing Auld Lang Syne.)

I love all Vleeptroids, here, on Earth and in the Dwingeloo-2 Galaxy! And wish everyone a MUCH MUCH BETTER 2016!

Oh, a special shout-out to The Uma -- salam, selam, safety wherever you may be, Syria, Lebanon, Pakistan, Afghanistan, Indonesia, Turkey, Iran, or Darmstadt DE.

And a special Salam to Khaled Mardam-Bey, who turned a gazillion strangers into neighbors! If there's True Hope for a better 2016, Khaled's one of the world's best bringers of this Hope.
Posted by Vleeptron Dude at 7:35 PM 4 comments: Links to this post