read it and weep / though not on trial, Henry Kissinger gave his approval to torture and kill 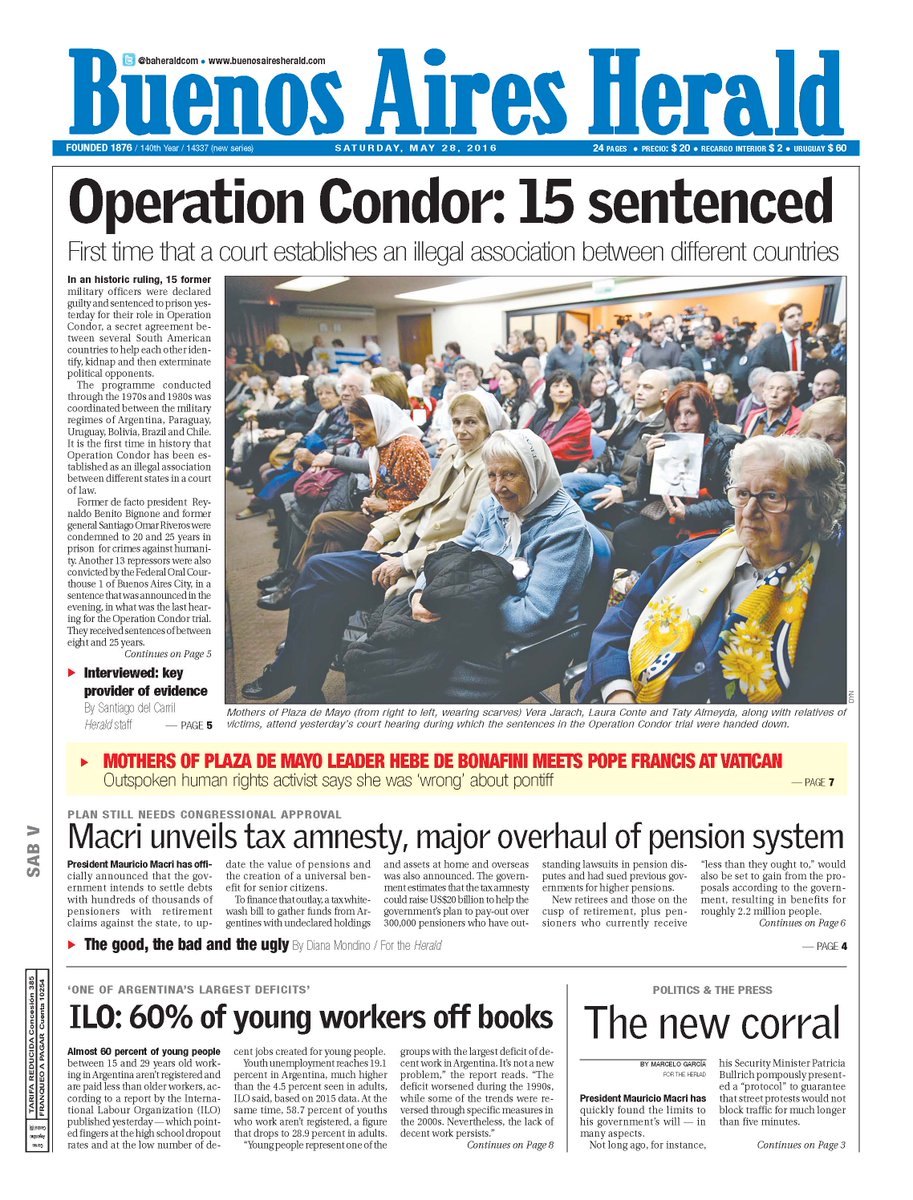 A historic verdict that could for the first time judicially confirm the cooperation between the Southern Cone region’s military dictatorships in eliminating political activists — in what is known as Operation Condor — could be given today, opening the door for further investigations.

Operation Condor was a plan between military regimes from Brazil, Argentina, Paraguay, Chile, Bolivia and Uruguay during the 1970s and 1980s to share information, resources and exchange prisoners who would then be secretly tortured and many times executed with their bodies discarded and hidden. “If the court ruling is favourable, this would be the first judicial sentence that addresses and establishes that Operation Condor was an illegal association between different states,” CELS Executive Director Gastón Chillier told the Herald yesterday. The human rights organization was part of a group of plaintiffs who requested that an investigation be opened in 1999, which finally commenced in 2013.

Although 32 former military officers from Argentina and one Uruguayan were originally indicted in the case, only 17 will receive a sentence after the others either died of natural causes or were removed due to health problems. The remaining accused will receive a verdict for the murders of 109 political activists from the region.

CELS and the prosecution are requesting up to 25-year prison sentences for the military officers. The majority of the victims originated from Argentina, while 45 were from Uruguay, 22 from Chile, 15 from Paraguay and 13 from Bolivia.

Part of the investigation focused on a clandestine detention centre known as Automores Orletti, where Uruguay victims who had tried to flee their country or were living in exile in Argentina were detained.

“We’ve had a lot of collaboration from Uruguay, Chile and Brazil in collecting and analyzing specific documents related to the investigation,” state prosecutor Pablo Ouviña told the Herald.

One of the most important pieces of evidence presented in the case is the Archive of Terror from Paraguay’s Museum of Memory that was discovered in 1992. The stash of documents demonstrated how the Paraguayan intelligence agents would cooperate, and the foundation of Plan Condor. “The Terror archive was incorporated in the case, showing how in 1975 they made Operation Condor official, and how the different countries would cooperate, and the phases of the plan in details,” explained to the Herald, CELS lawyer Luz Palma Zuldau, who is representing the human rights organization in the trial. The CELS lawyer was alluding to a secret meeting that occurred on November 28, 1975, held between intelligence heads from Argentina, Bolivia, Chile, Paraguay and Uruguay.

In this meeting, the Intelligence directors signed an act officially establishing Operation Condor. Intelligence agents such as the Argentine Jorge Casas, Bolivian Carlos Mena, Uruguayan José Fons, Chilean Manuel Contreras Sepúlveda, and Paraguayan Benito Guanes Serrano made a pact to eliminate not only political opponents, but also social activists, and union and student leaders. For decades, previous governments in the region denied that a secret operation had existed, until human rights activist Martín Almada discovered the “Archives of Terror” in 1992 in the Paraguayan city of Lambaré.

According to the CELS, Operation Condor was divided into three periods.

The first phase was the creation of a database to track the movements of guerrillas, political parties and leftist groups, union leaders, religious authorities, liberal politicians and anyone perceived as an enemy of the authoritarian military dictatorship.

This was followed by a second phase, where they would begin to identify and attack those political enemies in the region, and even in some cases eliminate those who were residing outside the region such as in the United States or Europe. A notable case is that of former Chilean foreign minister Orlando Letelier under ex-president Salvador Allende’s administration. In 1976, he and his US companion were blown up by a car bomb in Sheridan circle in Washington DC. This was later revealed to be ordered by former Chilean dictator Augusto Pinochet.

The documents incorporated in the trial also reveal that United States government agencies were aware of the program and some government leaders even secretly approved it.

One of the best-known pieces of evidence is a memorandum of conversation between former Secretary of State Henry Kissinger and former Argentine foreign minister Admiral César Augusto Guzzetti, which was declassified by the National Security Archive (NSA) in 2004. “If there are things that have to be done, you should do them quickly. But you should get back quickly to normal procedures,” Kissinger answers Guzzetti after consulting him about the human rights violations they were committing, in a meeting held in Santiago, Chile in June, 1976.
Although Kissinger’s and the US government’s role weren’t the focus of the trial, Chillier explained to the Herald that there is a possibility that this could lead to other investigations in the region.

“Kissinger’s role in this Operation wasn’t part of the investigation... but it remains clear that they (US government officials) were aware of the plan... An interesting piece of evidence incorporated in the case was that the US had facilitated a communications site based in Panama to help provide intelligence services to the nations involved via the telex system,” said Chillier. He highlighted that more information about the United States role in the operation could be revealed when archives from that period are declassified, as US President Barack Obama promised on his state trip to Argentina last March.

In many countries, such as Paraguay, investigations into crimes against humanity committed by the former military authorities has so far been limited. While former Paraguayan dictator Alfredo Stroessner and Chilean General Augusto Pinochet had been cited to testify, they died before they could be taken to trial. The only former dictator who is being tried is ex-Argentine general Reynaldo Bignone, who is the highest-ranking surviving ex-military figure.

For many victims from other countries, such as Paraguay, this is an opportunity to receive some type of justice over what happened to them. “This is a trial that will have not only effects in Argentina, but also symbolic and historic effects in countries that participated in Operation Condor... we hope this generates a series of political decisions that leads to more investigations,” said Palma Zardua.

Posted by Vleeptron Dude at 1:57 AM No comments: Links to this post 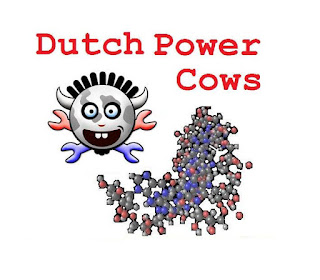 LEAVE A COMMENT if you know what (if anything) my t-shirt means or represents. What is it? What is it trying to say to strangers, kin, police officers, children?

What will my torso say to people I pass? (If anything.)

There's a Face. Say something about that.

There's a shitload of a gazillion colored little spheres. Somebody wake Amy.

Put them all together, and they tell the world:

What's going on on my public torso in a day or two? What's going on on your public torso in a day or two if you print this out and take it to Paradise Copies, Northampton MA USA and give the clerk some money, and come back the next day and you got a wonderful new t-shirt. (Once or twice I've put it on in the parking lot. I couldn't wait till I got home.)

But making a new t-shirt at Paradise Copies in Northampton (a big heavy fancy smart college/university town with much disposable income) is just goddam fun. I like to do my work and then linger and loiter and gawk. The whole workspace is just buzzing with ideas and goofy images and goofy-looking young and old people and have it tomorrow by noon. It has 5 types of liquid adhesive, it has adhesive tape, double-sided (my fave), staplers, scissors, gang punchers, all free, and it has about 20 self-serve monster computer-controlled photocopy machines. Reductions, Enlargements, you punch in the percentage change you want.

Everything in Northampton, Massachusetts is called Paradise. Paradise Pizza. Paradise Prosthetics. (We have a lot of military veterans because of the Veterans hospital and the USA's longest-ever wars.) Paradise Septic Service. Because [Wikipedia]

In 1851 opera singer Jenny Lind, the "Swedish Nightingale", declared [at the Academy of Music, still there, box office opens at noon] Northampton to be the "Paradise of America", from which Northampton took its nickname The Paradise City.

"Boys, there's a time and a place for everything. It's called college."

Big Pizza with Funghi & Garlic & Shallots for best (true) Comment. But feel free to submit False and/or Not True Comments.

The Dutch Power Cows are Dutch cows which run very fast and produce milk for delicious cheese on powerful engines (made by Philips in Lightbulbville).


Posted by Vleeptron Dude at 5:27 AM No comments: Links to this post

College students visit the island in the middle of Lake Shasta annually.

The University of Oregon is investigating allegations that a student trip spearheaded by its fraternities trashed a nearby island.

Up to 1,000 students, on 60 houseboats, are said to have been involved in wrecking Slaughterhouse Island, leaving trash everywhere in a location that has little mechanisms for its disposal. The island has no bathrooms. Park officials found 90 abandoned tents, trash bags, sleeping bag, coolers, and Oregon apparel.

College students visit the island in the middle of Lake Shasta in Northern California each year in May.


"What was different about this one is they left behind an incredible amount of trash," a representative for Shasta-Trinity National Forest told Tribune Media Wire.

The university itself called the scene "disgraceful."

"The manner in which the forest was left was absolutely unacceptable and disgraceful," said Robin Holmes, the vice president for student life.

There are about 4,000 students who are involved in fraternities and sororties at the University of Oregon. This is not the first time they have been implicated in trouble. Last month a report by the school found many of the fraternites and sororities perform hazing rituals where the students are forced to drink an excessive amount.

One photo from over the weekend showed a cooler with Lambda Chi Alpha's letters and the phrase, "Do you wanna do some blow man?"


No arrests have been made.


It was just a typical weekend," says Rob Sandbloom, sergeant in charge of the boating unit for the Shasta County Sheriff's Department. "When the college kids come down here...we have all of our boats out on the water."

No Charges for Frat Boys Who Taunted Veterans

Sandbloom did lambast the students, however.


"My personal guess is they have no respect for mankind, but professionally, I don't know," he said.


Park authorities are just trying to get the place back in shape for the holiday weekend.

"It's going to be days until it's cleaned up," Phyllis Swanson, spokeswoman for the Shasta-Trinity National Forest, said. "We hope to have it done by Memorial Day."

"This type of event puts a great amount of stress on us," she said. "We're low on resources and now we have to pull people from other programs to help with the clean-up."

Here are 5 reasons you should go solar nowNRG

23 Unreal Photos Taken Before Most Tragic Moments In …HistoryThings.com

Quiz: Can We Guess Your Highest Education Level?Topix Offbeat

These World War 1 Aces Will Leave You SpeechlessHistory Fanatic
by Taboola
More From U.S. News

Obama Behind the Scenes

Posted by Vleeptron Dude at 2:29 PM No comments: Links to this post