OMG we're grounded for hours on a sandbar 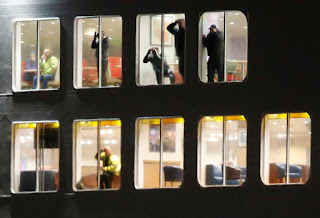 Passengers aboard the P&O ferry Pride of Kent watch rescue operations after the vessel ran aground during bad weather in the port of Calais in northern France, 10 December 2017. REUTERS/Pascal Rossignol

I love ferries. If all my traveling had been via ferry, that would have been Totally Swell with Vleeptron Dude. (But hell, I've helium blimped, I've ridden a camel, I've whirly-birded, I've STOLed, I've driven an ATV thru polar-bear-infested tundra ...)

I guess I've taken 3 or 4 ferries back and forth across la Manche -- UKers call it Something Else -- and I strongly suspect most were owned and operated by P&O.

First off, look at the photo of the stranded ferry passengers. They were stuck on Pride of Kent for many hours. (They had to wait for High Tide to refloat the stuck ferry. Time and Tide wait for No Man, Woman or Non-Binary.)

Look how uncomfortable they seem. Look how wrought with panic and anxiety. Look at them yawning.

Ever been in a big airport where weather or a volcanic eruption or labor troubles have canceled all the flights for a few days? Welcome to Hell. Angry, Crying-Jag Hell. With a chorus of Melted-Down little children, filthy clogged toilets. Drug and bomb-sniffing dogs (speak to them in German, they only understand German commands).

But you're not in an airport.

Relax. That's how the damn ferry was designed in the first place -- so a few hundred people could relax and be pleasured in a variety of comfortable ways for hours -- about 3 hours across la Manche, or ... hmmm ... about 8 hours from North Sydney, Nova Scotia to Newfoundland.

(Take the midnight ferry, the noon ferry is the one they fill with explosives and flammables. Just sayin' ...)

Whoops! Is there some kind of delay?

Is the ferry sinking? Have they ordered you to lifeboat stations over the Tannoy®?

If not ... well, just relax. Find a comfy stuffed couch. Lie down. Have a drink. Have 9 drinks. (Hey, YOU'RE not driving the boat ...) Sometimes the ferry will serve Delay Drinks on the house.

So far I've never had a Scary Moment on a ferry. (Okay, I've sea-sick barfed for a few hours, but on that voyage -- Yarmouth Nova Scotia to Portland Maine -- the ferry crew was puking, too. (Horatio Nelson was seasick his whole Royal Navy career, so what?) But no Vrai or even Faux Scaries.

To avoid these entirely, Don't Travel. Stay Home. Play Crimson Skies on your XBox One.

In the photo above, you're looking at a bunch of mildly annoyed but comfortable, relaxed passengers. They're on a machine designed to relax for hours. Some ferries have little casinos, so you can relieve the tedium with one-armed bandits (worst sucker game in the casino, math equivalent to throwing money into a toilet in hope of the toilet spitting money back) or blackjack. They're not even seasick, because the Pride of Kent was stuck on a sandbar. Buy a fresh tasty snack.

If you hate ferries, or lost your life on a ferry (I rode the identical twin ferry of the one that sank departing Zeebrugge, everybody drowned), whatever your ferry gripe is, Leave A Comment. Won't change my feelings about ferries, not in the slightest.

LILLE, France (Reuters) -- A P&O ferry with more than 300 people on board which had run aground in Calais harbour in northern France has been refloated and all passengers have disembarked, a P&O Ferries spokesman said on Sunday.

The Dover-bound Pride of Kent had run aground on a sand bank around midday as she tried to leave the Calais harbour in stormy weather. Nobody was injured.

The ship, supported by two tug boats, was refloated as the tide came in early evening and all passengers have disembarked.

The spokesman said most passengers would continue their journey to the UK on other P&O ferries tonight, while some would stay overnight in Calais on P&O’s expense.

UK-based P&O operates 20 ferries which carry 9,000,000 passengers per year between France, Belgium, The Netherlands and across the Irish Sea. 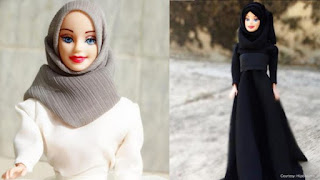 
Dearest Grand-Nieces and Nephew and Niece-in-Law,


Hmmmm okay I will buy Hijab Barbie for MYSELF and GAC, for reasons both Highly Spiritual and Investment Potential. (But I guess we can check eBay for the current worth of Unwrapped Blaine, Barbie's discontinued Australian surfer Boy Toy.) 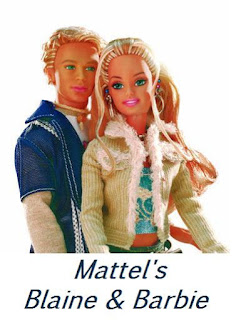 I went to a party at McDonald's once, a bunch of single mothers and their daughters, and they were giving the girls all sorts of Barbies. I asked why no one was gifting a single Ken, and a unison chorus of the single mothers replied:

Lord knows what you're getting from Heaven today, but I'm sure the Ski Resorts are delighted with it. It's our First Snow of the season, we got a roaring fire (a Big Treat for all the cats). Only our big polydactyl (lots of extra toes) Stewie (Stewart Wallace Darnley, named for GAC's Uncle Wally -- much of her family is of Scottish descent, and those names are the most famous names in Scottish history. Two of them are Beloved Great Heroes, but Darnley was perhaps the Biggest No-Good Bum and Cad in all history.) Oh, well, Stewie and his Many Toes and Big Feet is the best Snow Hunter in the house, in most kinds of snow he doesn't sink or slide. He listens acutely for vermin wriggling beneath the snow, and slays them very effectively. That's why polydactyl cats succeeded so well and became popular Good Luck cats in New England.

In the naughty screwy movie "Addams Family Values," Debbie the newly hired children's Nanny  is in reality a Monstrous Serial Killer, and as she prepares to execute the Addams Family, explains that her troubles began when, as a little girl, she wanted Ballerina Barbie for Christmas, but her terrible parents gave her MALIBU BARBIE, so she had to ... well, try to guess. Evil Debbie is played by the superfunny Joan Cusack. I think it's rated P for Perverse, but I would say it's Family Friendly. (Remembering that my Family is largely 4-footed, and they like to slay and eat small cute living things.)

I hope this letter pleases all, but I quote from a letter I sent to a Real Duke:

P.S. Please excuse my machine printing, a poor match to your handwritten note. I was apprenticed to a typewriter when I was about 12, and my handwriting just degenerated to illegible from there.


Posted by Vleeptron Dude at 4:08 PM 2 comments: Links to this post

Macrobius and the Slaughter of the Innocents 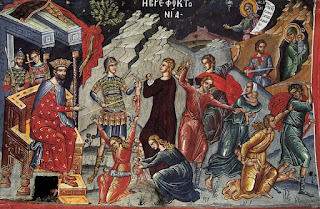 
Posted by Vleeptron Dude at 9:36 PM No comments: Links to this post

This is, I think, the oldest continuously sung English Christmas Carol. It was written and performed by a Guild in the Coventry Cycle of religious plays, on the church/cathedral steps. They (Alison Moyet here) sing of the monstrous calamity Christians call The Slaughter of the Innocents. Herod the King ordered all boys younger than two in Judea slain. A prophesy foretold that if allowed to live and grow up, a boy of that age would become King of the Jews. (Herod thought Herod was King of the Jews, permanently, for life).

However, among NASA scientists, The Slaughter of the Innocents was a massive government budget cutback on funds for robot space probe exploration. The scientists thought it was morally equivalent to slaying defenseless babies.

(I tend to agree when the government does stuff like that.)

Spoiler Alert: Send all kids out of the room before playing this Christmas Carol.


Posted by Vleeptron Dude at 9:19 PM No comments: Links to this post