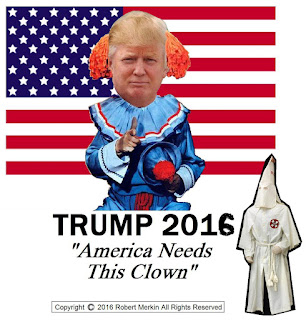 Vleeptron has been informed that the above referenced athletic match (with the ridiculously high score) was not a men's college American football game, but rather a basketball game.

Vleeptron tries to cover all interesting aspects of all sports, but let's face it, we don't know shit about sports. Vleeptron Dude's uni had some unfortunate shooting murder associated with the football program in the 1920s, and instantly and forever stopped playing college football.

(Maybe 100 years is enough time to say they're sorry, and NYU could start playing football again. You can't have a great university without men's American football.)

The same Vleeptroid who corrected the college athletic game -- notice the mourner about to make a free throw -- asked Vleeptron why we haven't been blogging about the USA political presidential campaign.

But that's not an acceptable reason not to blog about it. So here, briefly, with a promise to post more in the near future, is some disgusting USA presidential politics.

Yesterday was a collection of primary voting days from about a dozen USA states, and Vleeptron Dude ambled down to his polling place to mark his preferred candidate's name with a big X.

Vleeptron Dude has amazingly lived long enough to have voted twice for the USA's very first Negro / African-American President, and we suspect this was Phase 1 of taking the Zeta Beam to an Alternative Universe.

Which we did today at the polling place. When we get to this Alternative Universe, we'll see, in February 2017, the Negro President hand over the USA Presidency to the old Jewish Socialist guy from Vermont.

I took a bus through a blizzard to scowl nastily at W's 2001 inaugural in Washington DC. So I MUST see the African-American president hand over the White House to the Old Jewish Socialist. (This time I will be smiling in amazed delight, not scowling.)

Please note from the graphic above that Donald J. Trump, the winner of most Republican primaries on Super Tuesday, has never heard of David Duke, former Grand Dragon, or Krigat of Wands, or Sublime Whatever, of the Ku Klux Klan, who loudly supports Trump, and asserts that anyone who does not vote for Trump is a traitor to his or her (white) legacy. When asked by Cable News Network about Duke's endorsement, Trump later said he had a bad earpiece and didn't understand the CNN guy's question.

Okay, Agence-Vleeptron Presse has done its political duty and now must vomit, do some prescription and nearly-legalized drugs, and go to sleep.

Please Leave A Comment about the USA's exciting and entertaining Presidential campaign leading us via the Zeta Beam to a new Bizarro Universe.


Letters to the Editor
The Sophian
Smith College
Northampton, Massachusetts
To the Editor:
As a decades-long neighbor and admirer of Smith College, I was dismayed to see, at a televised Massachusetts Primary Day rally in Springfield, a young woman behind Hillary Clinton holding high a sign that said "Smith ♥ Hillary."
I was not dismayed by the unsupported claim -- ubiquitous in political campaigns -- that the Smith community loves Hillary. I trust The Sophian will report thoroughly on the campus's political leanings throughout the campaign.
My dismay stems from wondering -- if the sign was somewhat accurate -- why?
Because Hillary is a woman? I don't recall a tidal wave of campus enthusiasm when Sarah Palin was the Republican vice-presidential candidate in 2008. In fact I can't recall any positive Smith response to Palin's candidacy, not even one PALIN banner from a dorm window facing Route 9.
Because Hillary's record has consistently advocated for women's rights and equality? I will leave the truth of this belief as an exercise for Smith's excellent student journalists and researchers. I've studied Hillary's public record since she jumped from Arkansas to the White House as First Lady, and long ago concluded she is a very "soft," unreliable advocate for the rights of women and girls, here and worldwide.
She is certainly no pioneer in advocating for LBGTQ causes -- while New York Senator, skipping the NYC St. Patrick's Day Parade and marching in Buffalo instead while the NYC parade banned Irish-American LGs from marching.
Bill Clinton manufactured our military's "Don't Ask, Don't Tell" policy, and an incisive lesbian deejay at WTTC-FM Springfield defended the Clintons this way: "He's the first president who ever even lied to us."
Her Democratic Party opponent advocates (as Hillary does not) a policy of free college for America's young people. The Sophian embarrassed the Smith administration by breaking the story that Smith was ending its traditional "needs blind" acceptance policy. Bernie Sanders isn't offering Free Smith to young people, but aiming for free public colleges. That's sufficiently wonderful to get my vote; my father-in-law proudly wore this sweatshirt: "HARVARD -- THE MICHIGAN OF THE EAST."
Smith ♥ Hillary? Say it ain't so, Jo.
And if it is so -- well, Oliver Cromwell said it this way: "I beseech you, in the bowels of Christ, think it possible that you may be mistaken."
Bob Merkin
Chesterfield, Massachusetts
(30 years 8 blocks west of Smith)

Posted by Vleeptron Dude at 3:14 AM

I suffer from Coultrophobia, fear of clowns. At first I thought this funny man with the funny hair and the funny jokes was, well, funny. But suddenly I realized that he is not funny, but a psychopath in a clown costume. He fools and tricks people like in that Stephen King book.

Maybe it is good for me that I live in Europe. He will not come to us, will he ? Please don’t make him come to us. Please make him go away. Can you make that nice hippie bloke win ? I like that hippie bloke. Also not that Evil Corporate Woman, she also scares me. And that Hardcore Christian. He likes Creationism and that Jesus Monster. He scares me too.
Can you make the future better and turn on the Zeta Beam ? Or at least tell me what to do with my clown fear ?

Pat, CH
Not A Robot

I ain't giving away anything for free. I'll reply, but first ...

What up with the Suisse Referendum to deport non-citizen jaywalkers and double-parkers and schwingom chewers?

I don't know everything about Clown Fear, but lately on TV they've been showing a docu-drama about ...

Also one of my fave movies: "Killer Klowns From Outer Space."

Oh, the referendum ? It was supposed to work like the Three Strike Rule. Any foreigner or non-swiss citizen with two criminal offences within a certain period of time would be deported.
The whole thing was launched by the local equivalent of The Right-Wing Populist Pary Of Your Choice, the Swiss People’s Party SVP. They pumped a massive amount of money into the campaign (they used posters with sheep that look remarkably like the sheep on Minor Threat’s last EP). As you can expect it was all a bloody mess but the majority of Swiss didn’t fall for that crap. At least this time.
(Bob will get an image of the sheep poster)