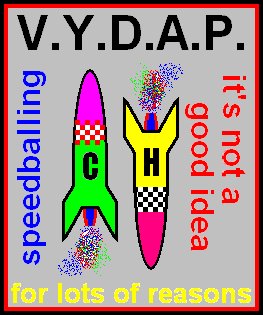 I was wrong; my memory is only partially reliable. The Royal Canadian Mounted Police D.A.R.E. officer died of an overdose of heroin and cocaine which he'd filched from the police evidence locker.

Shooting heroin and cocaine at the same time is known as Speedballing. It appeals to personalities who own two TV sets and like to watch "First Men on the Moon" with their right eye while watching "Journey to the Center of the Earth" with their left eye.

We attach this Cautionary Tale designed to scare the shit out of teenagers.

We wish to point out, however, that we feel we are at an unfair disadvantage in promoting our program to school administrators.

When we visit school administrators to show them our curriculum and what we have to offer, we park our Toyota 4x4 light pickup in the Visitors Lot and are wearing a wristwatch and a suit and tie.

When D.A.R.E.'s pitchmen and pitchwomen visit the principal, they shriek up to the front entrance of the school with flashers and sirens and are wearing a loaded 10mm Glock automatic pistol, handcuffs, pepper spray, sometimes a Taser, a nightstick and a badge, usually issued by the police department where the principal lives. Just Try Saying No to the marketing personnel under those circumstances.

D.A.R.E. was invented in 1983 by Los Angeles Police Chief Daryl Gates, who, following a series of religious and political miracles and a big race riot, is no longer the Police Chief of Los Angeles. Wikipedia reports:

The most common complaint is that [D.A.R.E.] is ineffective, and that there is no proof that students who go through the DARE program are any less likely to use drugs.[5]

The U.S. Department of Education concluded in 2003 that the DARE program is ineffective and now prohibits its funds from being used to support it. (Zernike) The U.S. Surgeon General's office, the National Academy of Sciences, (Zernike) and the U.S. General Accountability Office (GAO) have also concluded that the program is ineffective. (Kanof) The GAO also concluded that the program is sometimes counterproductive in some populations, with those who graduate from DARE later having higher rates of drug use. Studies by Dr. Dennis Rosenbaum, and by the California Legislative Analyst's office (Bovard) found that DARE graduates were more likely than others to drink alcohol, smoke tobacco and take illegal drugs.

Courtenay, British Columbia -- An anti-drug-crusading police officer took heroin and cocaine from a Vancouver Island RCMP [Royal Canadian Mounted Police] detachment a day before he died of an overdose that Mounties yesterday called a tragic "death by misadventure."

Constable Barry Schneider took cocaine and heroin from police exhibits on Oct. 25 and Nov. 28 -- the day before his daughter found him collapsed on the family's kitchen floor from what everyone in Courtenay assumed was a heart attack. It was revealed last month the 43-year-old drug-awareness officer died of a heroin overdose and had cocaine in his system.

Police told a news conference Friday there was no forensic evidence Constable Schneider was a previous or long-term user of illicit drugs.

"Having considered all of the circumstances, this tragic event is likely 'death by misadventure' in the form of an accidental overdose, or the remote possibility of suicide could also not be eliminated," Corporal Grant Learned said.

A criminal investigation concluded there was no foul play but the coroner is investigating and the cause of Constable Schneider's death last Nov. 29 remains undetermined. It is not yet known how he ingested the drugs, which were probably consumed within three hours of his afternoon death.

The case remains an unsettling mystery in the small Comox Valley town where the handsome family man and 23-year force veteran preached against the evils of drugs and received a hero's funeral.

News of his drug death dropped like a bombshell on this seaside community of 20,000, located 200 kilometres north of Victoria. The coroner initially said Constable Schneider died of a heart attack but tests found lethal amounts of heroin and cocaine in his system.

Investigators revealed yesterday that cocaine and heroin were found in Constable Schneider's police vehicle in a carrying case the day after his death but say there was no evidence of drugs at his home. Further tests are expected to determine whether the lethal drugs came from the detachment samples.

"There was no evidence at the time that Constable Schneider's administrative omission in accessing the drug exhibits was either willful or malfeasant," Cpl. Learned said. "He was a police officer of unquestioned character and integrity, with an exemplary service record."

Constable Schneider drove around town in a police car emblazoned with the words "Say no to drugs" and lectured educators and addiction counsellors. Newspaper stories and photographs about the Drug Abuse Resistance Education [D.A.R.E.] program were showcased along with his golf clubs and fishing gear at his funeral, which was held in Canadian Forces Base hangar in Comox to accommodate nearly 700 mourners. The program aimed to prevent young people from taking drugs.

His death has left his colleagues, friends and family baffled.

"There are many unanswered questions that only he knows the answers to," Inspector Dave Zack of the Courtenay RCMP detachment said.

Constable Schneider, who was married with two daughters, spent most of his career in the RCMP drug sections in Burnaby, Vancouver and Bella Bella before he was transferred several years ago to Vancouver Island's Comox Valley. He was widely regarded as a role model.

"He was beyond reproach," said Greg Phelps, a friend and spokesman for Constable Schneider's family. "Talk to anybody in the community. Talk to anybody that he served with. This was a guy who was dedicated to his job. That's why we're all so shattered by this. This guy ate, slept and breathed the DARE program in the time that he was with it."

"There was no indication of addiction to illicit drugs," said Mr. Partridge, who refused to say whether there was any evidence of an addiction to prescription drugs, citing privacy issues.

There has been speculation about Constable Schneider's health after reports surfaced that he was taking painkillers.

A coroner's inquest has not been ruled out, Mr. Partridge said.

Mr. Phelps said the family does not want to disclose the officer's medical history.

"He believed that drugs are dangerous and his death obviously proves that point," the family said in a written statement released yesterday. "We remember him as 'a person,' someone who loved and was loved. We ask that you look to Barry and remember him not as he died but as he lived, in God's eyes."

Burnaby ? Sounds like a nice quite cozy Suburbs to me where the Shopping Mall is just around the corner, a place where people mown the lawn on Saturday afternoons. Something like "Wonder Years" or "The Monsters Are Due On Maple Street" if it gets really bad. Michael J. Fox and Joey Keithley from the allmighthy D.O.A. are both from Burnnaby. Hm.

Man On the Ground can report that a few months ago a police prefect in the french part of CH stepped down from office after he had demolished a few cars and driving while under the influence of alcoholic substances (aka white wine from the Geneva Lake region). So there you have it. Coppers are not Bastards, they are just Bastards with a tendency to all-too-human behaviour

I don't know if CH is in any way involved with this, but you're a lot closer to it than I am. Can you tell us about The Lakes Of Wine which the EEC is having angrier fights about all the time? Where are they? Can I bring a camping cup and paddle a canoe on them? We don't get much English-lingo news about The Lakes Of Wine, but it really sounds like an interesting place for my next Euro-trip, sort of like the Tulip Fields or the Thames Barrier -- a Gawk Thing.

When a friend of mine was a reporter, she got a Hot Story about the Police Chief who was always screaming around town in his Police Car with Sirens and Flashing Lights -- but, it turned out, he didn't possess a valid driver's license. Tiny little hill town, his police department probably had about six officers, but that story made the National News wires, it flew far and wide.

You mean this Cassis De Dijon thingy ? There is something going on, and I must adimt that it has gone off my radar (sorry, but there is just toooo much news out there nowdays). I'll do some research, I'm The Man On The Ground, that's what I'm here for, innit ?
Not just leaving stupid comments with fake silly names and annoying everyone else to leave a comment, but gettin' down to the nitti-gritty, and give somethign back to the blogger community , innit ?

I found a great deal of helpful information above!

You should be a part of a contest for one of the highest quality blogs online.

Well anyway, whenever you get here, Anonymous, THANKS!

There are 790,322,105 blogs in the Blogosphere, and you are fucking-A right, VleeptronZ is in the Top 14 (result of independent survey by the Cantor Poll, which is a breakaway poll from the Gallup Poll).

well, i guess for the first time in RCMP history, there was a murder, and the Mounties still haven't got their man.