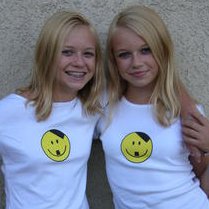 Hmmm. Surfing today I ran into this. Hmmm. So I filched it and I'm posting it. Maybe clicking will help.

Obviously the world ended last month and nobody told me.

You know who this is , do you? Just in case you don't: This is Prussian Blue, 2 sisters singing folk songs of a very dubious nature for White Trash Trailor Park Folks. This is garbage, ignore it and put on some Camper van B.

yeah, i could tell from the website they were famous humans, i just didn't know why or who. thanks for cluing me in. we don't get very frequent updates on youth entertainters here in the Altevolkehaus.

it was the t-shirts that got my attention. do their rents let them out of the house dressed like that?

hmmm deep in the dark recesses of the junkpile which is my brane i seem to remember being slimed by some TV show about these adorable little girls.

what kind of TV do you watch in the Alps that shows you stuff like Prussian Blue? What other images and texts are you getting about Life in the United States of America?

My beloved Wikipedia has brought me up to speed about these sweethearts.

Their father is apparently suing their mother for custody.

I recommend that they not wear those t-shirts to court.

About 98 percent of the time, Mom wins the child custody fight.

This could be the other 2%, if Dad's lawyer plays their CDs.

(But why does he want them?)

The USA still sorta celebrates Free Speech, and there isn't much you can do with just your big mouth which can get you into legal trouble.

But these sweetie-pies and their mom are sure pushin' it.

See ? I told you this is White Trash Trailor Park stuff. I wanna see these gals in 20 years. they will probably end up in said Trailor Park being married to some stupid bastard who beats them up on Fridays after he drank up his paycheck for a job he had for about 2 weeks and just lost again. And Eminem will be their Neigbor.So much about Herrenrasse

How we get News about the US ? Oh there is CNN of course, but I dont watch that dreck (I donßt watch much TV nowdays, too much garbage like Lost etc)there is also MSNBC Europe with Jay and Conan late at night. Oh, and MTV, but thats for the kids, not me (anymore).
the media landscape in europe is much more interesting than yours.
there are a LOT of private tv channels broadcasting a LOT of garbage, but at least in Switzerland, France, Germany and Austria there is also Public Broadcasting, funded by the various governments with good programmes on Art, Music and such.
There are even 2 channels (Arte and 3sat) devoted to nothing else and I think that was where I saw these 2 gals doing their schtick.
Switzerland itself has 6 public broadcasting stations (2 for each language region). they are a bit of a mix the two exaples. you can get Deal or No Deal and a documentary about Fritz Wunderlich on the very same channel on the very same evening. Not that bad, I. Better than endless adverts interrupted by snippets of Desperate Housewives.
still, a good book is much more preferred